Read More
As per November is a busy month for me between work, sponsor stuff, family obligations, training, partying and of course trying to climb. It started with our comp at the Ice Factor which went well and we raised around £600 for the Glencoe MRT. The following Friday was helping set at GCC for their comp then on the Saturday to Snow Factor with Rhona for her first shot at ice climbing.
Monday morning was an early start with Joe and Conor to pick up Jeff Mercier who was visiting from France. First we headed to Lyon Outdoor HQ so I could do a short talk and we met Steve Johnstone there too. After this we had an epic trying to find the Works but got there eventually to find Greg, Masa and Will already there and everyone got stuck in. Watching these guys is a real eye opener to how strong the top boys are and it has really made me want to train harder.

Cave full of psyche
After a first day where I felt the effects of sleep deprivation and horrendous recent epilepsy side effects hitting me I knew I had to try harder the second day. After a good warm up I tried the route below but came frighteningly close to breaking my left arm and became very dejected, definitely the low point of the trip for me. 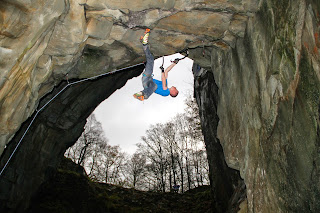 Seconds before nearly breaking my arm 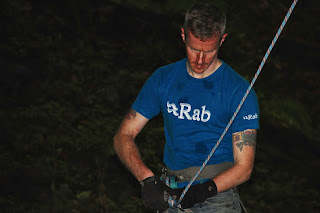 Severely scunnered and thinking of selling my DT kit
I kinda just walked off myself for a few minutes after this told myself to stop being weak and just get back into it. Shortly afterwards Jeff sent Powerdab (hardest route there)  first attempt which seemed to psyche everyone up, the guy is a machine. 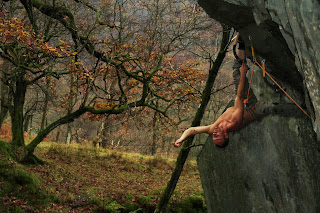 Jeff on Powerdab D13
Next day was our last visit to the cave and with everyone keen to finish routes and some good patter with Ian Parnell the mood in the cave was good. Joe sent First Blood in an impressive battle and its his hardest route to date. 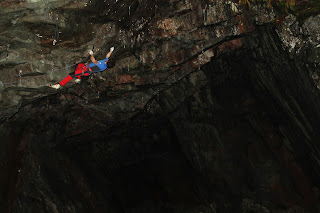 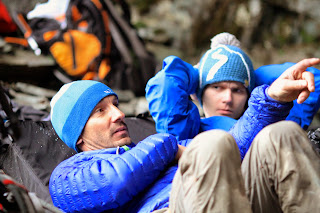 A mix of French, Polish, Scots, Irish and English accents made conversation interesting.
After numerous attempts at First Blood I was feeling strong and on my last attempt I got to within one move of the finish and dropped my axe, denied 🙂 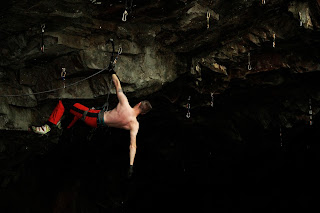 Me on First Blood 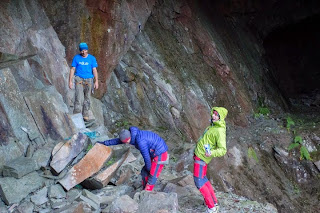 Jeff laughs as I try stretching and Joe takes the piss, humour soon killing my feeling of defeat.
Thanks to Dorota Bankowska and Conor McCarthy for the photos.