Yesterday Jane , Steve and myself headed out to Lochailort. Steve was ultra keen to get on Skyfall (a very bold E6 6b which I climbed 2 years ago after a drawn out mental battle) and I had my sights set on a new route. We both knew if it all went to plan it would be an outstanding way to kick start our season and to set us up for bigger plans later in the year. It was warm on the walk in but thankfully there was a nice breeze, we set up our respective top ropes and Steve tried his route first, on his second attempt I knew it was going to be a good day. 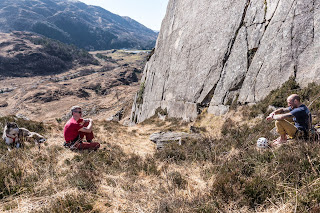 Chatting and chilling out. Image by Jane Holmes
Steve quickly decided to just get on lead. He belayed me when I lead it and he said it was scary to watch, I soon found out what he meant but he climbed in his usual solid style and topped out with a big sigh of relief, effort for his first route of the season. 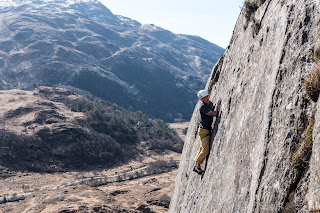 Steve on Skyfall.  Image by Jane Holmes
Next was round to my route and it was getting very warm which was giving me a slight bit of concern due to the smeary nature of the climbing, also it was my first climb since my surgery. However I was psyched after watching Steves lead and I was keen to get this route sent to get my head in gear so after a few top ropes I decided to just go for it. It felt amazing to lead again and especially on such a consequential bold route way above marginal gear. 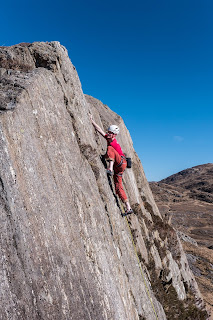 Nearing top of The 45.  Image by Jane Holmes 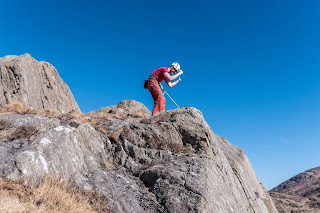 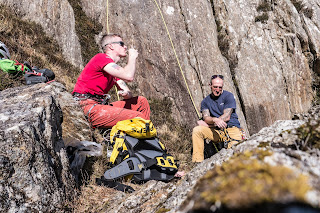 Traditional sip of whisky.  Image by Jane Holmes
This was likely my last trip to the Lochailort crag as I’ve climbed everything here I want to now. It’s gave me every emotion possible and it’s quite sad that I’ll probably never climb here again but I’ll always have happy memories of the amazing times I’ve had at this amazing crag. It’s not just the climbing thats great but the outlook and in particular the feeling of the history of the area that seems ever present. 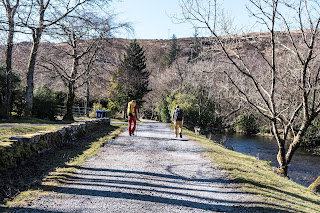 Image by Jane Holmes
Walking out, end of one chapter, start of a new one…………:)